Santo Domingo Pueblo, on the east bank of the Rio Grande about 40 miles north of Albuquerque, is the scene each August 4th of the largest Indian dance ceremony held annually in the southwest. This is the feast day of St. Dominic, patron saint of the historic Indian Pueblo, and more than 1000 Santo Domingo natives join in on a presentation of the colorful Green Corn Dance.

MEN, WOMEN, and CHILDREN, all in beautiful ceremonial attire, dance under the sun in the big plaza of the old adobe pueblo to the sound of chanting and pounding of drums. The Green Corn 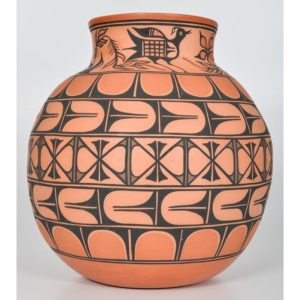 Dance at Santo Domingo Pueblo each August 4th attracts thousands of spectators from all parts of New Mexico and even from the far corners of the world.

FEAST DAY activities begin with a morning mass in the picturesque mission church at the east edge of the Pueblo. After mass, a statue of St. Dominic is carried in a procession from the church to a place of honor in a bough covered shrine on the pueblo plaza. Here, flanked by candles in the three-sided rustic bower, the inside walls of which are lined with Navajo rugs. The statue will remain until the dance ceremony is completed. Then it will be returned to the church.

The Green Corn Dance should be underway by 10 am and continues through late afternoon. Members of the squash and the turquoise clans will alternate in the dancing. Pueblo Indian potters and silversmiths will display their wares for sale on tables and on ground in the Pueblo, food concession stands and carnival rides will be set up.

Since this is a religious observance, NO PHOTOGRAPHY, SKETCHING, OR TAPE RECORDING WILL BE PERMITTED. NO ALCOHOLIC BEVERAGES ARE ALLOWED ON THE INDIAN RESERVATION.